An Alternative to Private Equity and Hospital Absorption: Use of ESOPs for Medical Practices and Physician-Owned Hospitals in Texas

TOA disclaimer: The following article has been provided for informational purposes only.  It does not constitute legal or accounting advice. You should consult your attorney and accountant.

It is hard to think of a profession that has faced more challenges than medicine. For the past decade, physicians have been hammered by regulatory overreach, cuts in reimbursements, increased administrative costs and a generally hostile legislative environment.  As a result, many private practices have ceded their independence and financial upside to be acquired by/partner with large hospital organizations or private equity.  While the three alternative models consisting of private practice, large hospitals, or private equity have seemed like the only “endgame” for physician groups, there actually is a fourth alternative. Physicians may be able to retain their independence while, at the same time, enjoying greater cash flow benefits and income security through an Employee Stock Ownership Plan (“ESOP”).

Created as part of the Employee Retirement Income Security Act of 1974 (“ERISA”), ESOPs have enjoyed immense popularity among private companies.  For decades, owners of private companies have used ESOPs to help them manage their succession process and to get liquidity (cashflow) via ESOP tax benefits WITHOUT ceding control to an outsider.  The tax benefits derive from a special ESOP feature, providing that, if a sub S corporation stock is owned by an ESOP, the corporation is not subject to tax.

While the ESOP concept has been enthusiastically embraced by numerous professions, ESOPs have been slow to penetrate medicine. There is not a ready explanation for this.  While engineers, architects and dentists have been quick to jump on the ESOP bandwagon, there are only a few dozen physician ESOPs (and one ESOP converted physician-owned hospital).  Most likely this has been due to concern about the state laws limiting the owners of medical practices to physicians.  However, with the proper ESOP structuring, this issue can be easily managed—to ensure that the stock is and always will be owned by physicians, even with the ESOP structure.

Assuming that the ESOP is properly structured, the benefits of an ESOP for the typical medical practice are impressive.  Let us consider a typical private practice before the ESOP: the practice may consist of a few “seasoned” physicians nearing retirement and a corresponding number of new physicians coming in. The “exit” strategy is usually to pay the retirees roughly the amount they invested when they came in—an amount that is substantially less than the actual value of the practice—while having the young physicians pony up money to buy into the practice.  Both sides of this process are miserably tax inefficient.  If cash is paid to the retiring physicians out of profits, the profits are subject to tax before they go to the physician.  In Texas, this means that, of $100 profit, only $64 will be available to the departing physician (and then she may also pay 15 percent long-term capital gains—so that roughly half of the $100 has gone to taxes).  Similarly, the incoming physician has to use after-tax dollars to make her contribution. To put in $100, she needs to make roughly $140.

The implementation of an ESOP changes everything. When the ESOP is finished, all of the shareowners receive promissory notes (IOUs) from the company that are equal to the full fair market value of the company—not some “book” or investment value.  Then, because the ESOP—rather than individuals—now owns the company, the company is no longer subject to tax.  This means that the company can use the full $100 of profit to pay the former shareowners, as opposed to $64; there is no hair cut for taxes.  Then, the ESOP renders the company free of tax going forward so the company is free to retain and form capital.  If the company has taken/plans to take on debt to buy equipment or property, debt payments can be made on a pre-tax basis—making acquisitions and purchases substantially “cheaper” and more tax efficient.  Finally, with proper structuring, future appreciation and value can go out without tax.  The cash flow implications are staggeringly beneficial to the physicians nearing or at retirement, as well as to people coming into the practice.

Implementation of an ESOP can occur fairly quickly—over a period of three to six months. The process is simple: after a feasibility study is done and the cash flow effect has been reviewed, a third-party valuation expert is brought in to determine the full, fair market value of the company. Then, promissory notes are given to physician-owners equal to the actual value (not a book or investment value, but full, fair market value). After the stock has been purchased from the owners, new stock is immediately issued to an ESOP trust. Profits are free from tax and the company, former owners and participants can immediately enjoy tax benefits associated with the ESOP structure. Cash flow is instantly improved. (In fact, the implementation costs should be well less than the first year’s tax savings.). New physicians are no longer required to buy into the practice. They are, instead, able to enjoy the benefits of ownership via ESOP participation or synthetic equity; the antiquated process of using after-tax money to buy-in is no longer necessary. This should be regarded as a huge advantage to recruitment.

After the cash flow benefits are understood, the main concern about an ESOP is governance: Who is in control?  People hear the phrase “employee stock ownership” and become concerned that the employees will take control of the company. This is not the case. Under the ESOP structure, the trustee—not the employees—owns the stock of the company.  For a physician group, it is typical to have a committee serve as trustee.  The committee will consist of physicians. Under the shareholder/trustee is a board of directors. Again, the board can and should be constituted by physicians. Management, which answers to the Board, should remain unchanged. Thus, governance stays intact. Before the ESOP, physicians own, control and manage the practice and, after the ESOP, physicians own, control and manage the practice.

A final note: many physician-owned hospitals and ASCs have been forced to migrate toward joint ventures with tax-exempt hospitals.  In these situations, hospitals end up owning 50-plus percent of the hospital or ASC while the physician groups own the balance.  This structure can be readily adapted to an ESOP ownership structure. 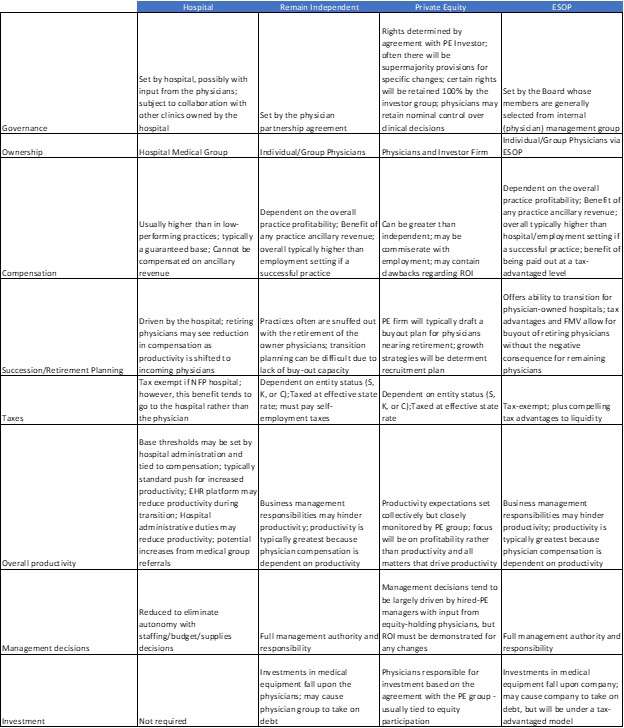 Bellview Associates, LLC, is an investment bank that actively advises companies in the ESOP space.  Bellview is in the process of setting up a Texas presence and has been working with attorneys and other service providers to bring ESOPs to Texas.  It has developed a legal framework for physicians that has been vetted and blessed by Texas counsel. For persons wishing to learn more about the process, please reach out to Susan Scherbel (susan@bellviewassociates.com), who is the Managing Partner at Bellview Associates, or contact Paul Averitt, MD (paul@bellviewassociates.com) for questions regarding Texas ESOP development.