A Look at the Evolution of Football Injuries 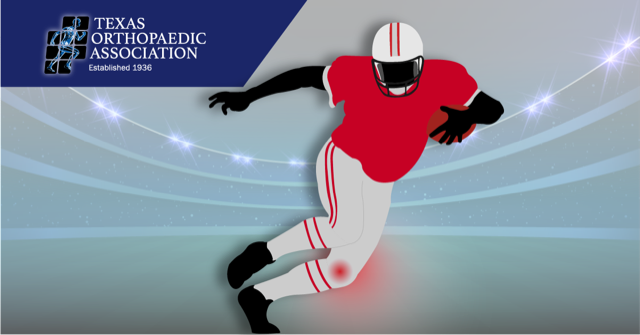 TOA recently sat down with Field Scovell, MD of the Carrell Clinic in Frisco and Shane Miller, MD of Texas Scottish Rite Hospital for Children in Frisco to take a look at the evolution of football injuries and their treatment.

The following is TOA’s conversation.

TOA: Have you and your colleagues changed the way that you manage concussions over the past few years?

Field Scovell: The threshold has been lowered, and rightly so. And our sensitivity is up.  We are looking for it: Not just the hit or contact, but a player’s reaction to it.  Our overall approach, especially at lower levels, has improved. The state requirements for education for coaches and trainers is good.  And most everyone in the stands is aware of the issue.  It can be tricky because there is some inconsistency in return to play among schools at all levels.  But no question the approach is better, and treatment/plan for recovery is better as well.

Shane Miller: There has been a shift toward more active recovery and rehabilitation following concussion over the past few years. Both the AAP and CDC issued guidelines last year emphasizing the potential negative impacts of prolonged rest on recovery, including increased symptom burdens and longer recovery times. Early light aerobic activity has been shown to speed recovery and decrease the risk of persistent post-concussive symptoms. Patients should be counseled to return to non-sports activities (including school and light physical activity) as their symptoms allow after no more than 2-3 days of rest following the injury.

TOA: Have you seen an evolution in injuries on the football field?  And how are the parents of your patients responding to football injuries?

Field Scovell: I do not believe there is an increase in the severity of injuries.  Kids are often in better condition from a physical standpoint because that aspect of sports has become such a big part of the game.  It is an entire industry now.  What has changed is that often before an injured kid gets off the field the parents are waiting for them on the sideline.  I don’t know if it’s an evolution of the helicopter parent.  But it’s a real problem.  It interferes with the ability of the medical team to evaluate a kid on the sideline.  Also, I’ve dealt with parents, often they have some connection to the medical profession (nurse, PA, doctor) treating their own kids before a game or even during a game. It’s crazy.  I don’t know if it’s a lack of trust, a product of the internet world we live in, or this idea that every kid is going to the NFL.  Often I have instructed kids and parents that there is no need to go to an ER and just to follow up at a Saturday morning injury clinic or first thing the next week.  And they end up going to an ER for an injury that’s not an emergency.

Shane Miller: As a collision sport, inherent injury risks exist. Injury rates increase with age, as players grow bigger, faster and stronger. The rates of serious injury in youth football are relatively low compared to that of high school and college, and game injury rates remain higher than practice. Implementation of safety training, rules and equipment have the potential to reduce injury risk. For example, football fatalities dropped markedly after the introduction of the spearing rule in 1976 (see below) 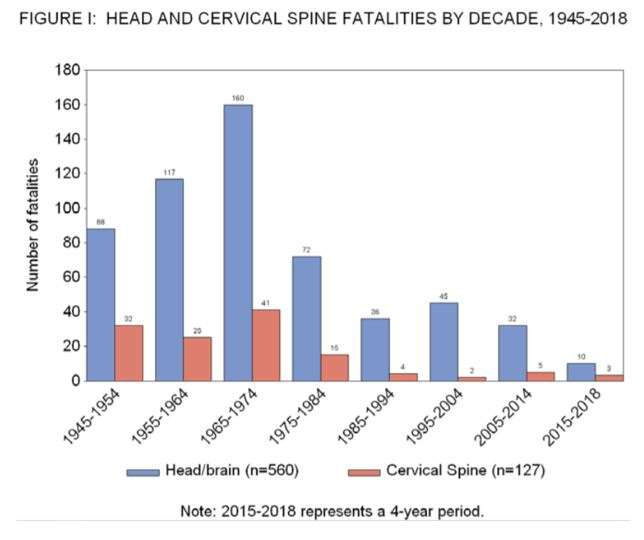 TOA: What is your reaction to Andrew Luck’s retirement from the NFL?

Field Scovell: My reaction is that this is consistent with the general trend in youth football.  Participation is down.  Parents are asking why I would allow my kid to be at risk for injury, namely concussion.  I say good for him.  It takes a very mature person to make that kind of decision to walk away from a sport or an activity that you are really good at and can make wages that none of us will ever see.  My son plays football.  I wonder what’s at risk?  Concussion is one thing.  An ACL tear means your knee is different for the rest of your life.  It’s a tough deal.  There are so many benefits to playing sports and especially football.  But at what cost?  It’s worth asking.

Shane Miller: Every athlete is entitled to the right to determine when it is time to hang up the cleats and walk away from the game, for any reason. Andrew Luck has been a warrior who has struggled to stay healthy and remain on the playing field. So many of us treat patients with injuries and chronic pain, and witness firsthand the impact that pain has on all aspects of life, not to mention one’s desire to play a sport that continues to wreak havoc on his body. Luck is a very bright individual with a future that is likely to be even more significant off the field. Similar to Tony Romo and others who have traveled the same road before, sometimes it takes more courage and wisdom to know when to walk away than it does to remain.

TOA: How are the parents of your athletes responding to injuries? Have you witnessed a shift in their response to football?

Shane Miller: Increased awareness, media attention, and legislation have prompted even the most avid sports enthusiasts to evaluate the safety of participation in youth tackle football. Concerns regarding the potential long-term cumulative neurocognitive risks of repeated concussive and subconcussive impacts and potential development of chronic traumatic encephalopathy (CTE) which has been diagnosed in a small subset of former collegiate and NFL players have experts on both sides of the ball defending their positions. The 2018 AAP guidelines state, “The long-term effects of a single concussion or multiple concussions has still not been conclusively determined.”

The AAP issued a policy statement in 2015 on Tackling in Youth Football addressing many of the points of controversy. One recommendation has been to ban tackle football until a certain age. A recent study by Chrisman, et al. found that 61% of parents surveyed would support age restrictions for tackling, and an additional 24% “maybe” would support restrictions. Interestingly, parents surveyed overestimated the risk of concussion in high school tackle football (83% perceived the rate to be >10 out of 100/year, when actual reported incidence rates range from 4-7 out of 100/year).

Another recommendation along these same lines was the expansion of non-tackling (ie, flag football leagues). Peterson, et al. followed youth flag and tackle football leagues and concluded that injury is more likely to occur in youth flag football than in youth tackle football, and severe injuries and concussions were not significantly different between leagues. The expansion of 7-on-7 football recently in Texas has also seen significant injuries, now mandating the use of soft-shell helmets in response to high profile injuries and efforts toward injury risk reduction.