In addition, TOA’s coding course on Friday, February 1, 2019 in Houston will cover many of the new coding changes. (Click here for details.)

CMS introduced the concept of eliminating the current E/M system this summer with a proposal that would have resulted in only two levels: level one and a new level to replace the current levels two through five. CMS indicated that this was an attempt to reduce paperwork. In addition, CMS pointed out that several specialties, including orthopaedics, would have witnessed an overall increase. However, certain sub-specialties that rely on the more complex codes would have witnessed a hit.

CMS’s final rule this week will result in three levels for E/M beginning in 2021:

Keep in mind that since this has not been scheduled until 2021, extensive changes could be made between now and then.

Axios Vitals summarized it in the following graphic: 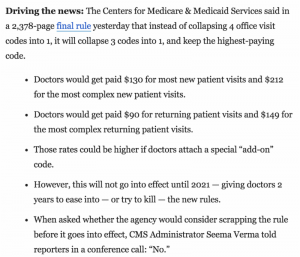 AAOS will have an extensive analysis of the rule in the near future.

TOA members should turn to their November 3, 2018 e-mail update for the full background on this issue.

CY 2019 Payment Policy for ASCs and HOPDs: A Big Day for ASCs

CMS finalized its CY 2019 payment policy rule for ASCs and hospital outpatient departments on November 2, 2018, and, as mentioned over the past few months, it was a monumental proposal for ASCs. ASCA, the Ambulatory Surgery Center Association, had been pushing many of these issues for many years.

The greatest victory for ASCs was CMS’s decision to finalize the proposal to align the annual payment update factor for ASCs and HOPDs. In the past, HOPDs received the higher annual market basket update (ASCs received an annual update that was tied to the lower inflation rate). As a result, the gulf between ASC and HOPD payments widened each year. While ASCs will continue to be paid less than HOPD services, that gulf is unlikely to grow every year due to the alignment.

Musculoskeletal services did not feature a large debate in the 2019 proposal. Last summer featured a debate over adding THA/TKA to ASCs for the 2018 Medicare payment proposal, and CMS eventually backed away from adding them to ASCs. However, CMS is likely to take a look at THA, TKA, shoulders, and some other services for ASCs in future proposals.

Several other musculoskeletal-related issues were confirmed in the CY 2019 final rule, including a lower device intensive procedure threshold and payment for non-opioid pain management therapy (Exparel).

CMS also used this rule as an opportunity to remind stakeholders that the 21st Century Cures Act, which was signed into law by then-President Obama in early 2017, directed HHS to create a website that allows patients to analyze the costs associated with ASCs and HOPDs:

For example, to provide for easier comparisons between hospital outpatient departments and ASCs, as previously discussed in the CY 2018 OPPS/ASC final rule with comment period (82 FR 59389), we stated in the CY 2019 OPPS/ASC proposed rule that we also will make available a website that provides comparison information between the OPPS and ASC payment and copayment rates, as required under section 4011 of the 21st Century Cures Act (Pub. L. 114-255). Making this information available can help beneficiaries and their physicians determine the cost and appropriateness of receiving care at different sites-of-service. Although resources such as this website will help beneficiaries and physicians select a site-of-service, we do not believe this information alone is enough to control unnecessary volume increases.

TOA has been talking about the concept of site neutral payments in its newsletters since 2012, so our hope is that every reader understands the concept, which has been embraced by both Democrats and Republicans in Congress and CMS. To summarize, if a service can be paid in two different types of settings, and one setting is being paid at a higher rate, then Medicare will pay for that service at the same rate in any type of facility.

This other comment by CMS will help you to understand CMS’s interest in the site neutral payment concept:

In the CY 2015 OPPS/ASC proposed rule (79 FR 41013), we stated that we continued to seek a better understanding of how the growing trend toward hospital acquisition of physicians’ offices and subsequent treatment of those locations as off-campus provider-based departments (PBDs) of hospitals affects payments under the PFS and the OPPS, as well as beneficiary cost-sharing obligations. We noted that MedPAC continued to question the appropriateness of increased Medicare payment and beneficiary cost-sharing when physicians’ offices become hospital outpatient departments and that MedPAC recommended that Medicare pay selected hospital outpatient at PFS rates (MedPAC March 2012 and June 2015 Reports to Congress).

CMS finalized its proposal to extend site neutral payments to clinic visits that are part of hospital outpatient departments for “check ups,” and these represent the most common service billed under the outpatient prospective payment system (OPPS). Per CMS:

Method to Control for Unnecessary Increases in Utilization of Outpatient Services
CMS is exercising its authority to utilize a method to control unnecessary increases in the volume of covered hospital outpatient department services by applying a Physician Fee Schedule (PFS)-equivalent payment rate for the clinic visit service when provided at an off-campus provider-based department (PBD) that is paid under the OPPS. The clinic visit is the most common service billed under the OPPS. Currently, Medicare and beneficiaries often pay more for the same type of clinic visit in the hospital outpatient setting than in the physician office setting.

This policy would result in lower copayments for beneficiaries and savings for the Medicare program in an estimated amount of $380 million for 2019, the first year of a two year phase-in we are utilizing to implement this policy. For an individual Medicare beneficiary, current Medicare payment for the clinic visit furnished in an excepted off-campus PBD is approximately $116 with $23 being the average beneficiary copayment. The policy to adjust this payment to the PFS equivalent rate would reduce the OPPS payment rate for the clinic visit to $81 with a beneficiary copayment of $16 (based on a two year phase-in), thus saving beneficiaries an average of $7 each time they visit an off-campus department in CY 2019.

Congress passed a budget bill that was signed into law on November 2, 2015 that created a site neutral payment policy for certain services at off-campus, hospital-based provider-based department (PBD). Any PBD acquired after the effective date would no longer be paid the higher OPPS fee for certain services.

However, Congress did not make it clear whether a grandfathered PBD could begin offering a new service after November 2, 2015 and be paid the higher OPPS rate for that new service. CMS has indicated its belief that it has the statutory authority to limit new service additions at higher rates if they were not provided in a grandfathered PBD prior to November 2, 2015. However, CMS has received considerable pushback from hospital stakeholders and has declined to move forward at this time: “In response to public comments, we did not finalize our proposal to limit the expansion of excepted services at excepted off-campus PBDs.” (Page 661.)

However, while we continue to believe that section 1833(t)(21)(B)(ii) of the Act excepted off-campus PBDs as they existed at the time that Pub. L. 114-74 was enacted, and provides the authority to define excepted off-campus PBDs, including those items and services furnished and billed by such a PBD that may be paid under the OPPS, we are concerned that the implementation of this payment policy may pose operational challenges and administrative burden for both CMS and hospitals. After consideration of the public comments we received, we are not finalizing this policy as detailed below.

CMS commented in the rule:

In the CY 2015 OPPS/ASC proposed rule (79 FR 41013), we stated that we continued to seek a better understanding of how the growing trend toward hospital acquisition of physicians’ offices and subsequent treatment of those locations as off-campus provider-based departments (PBDs) of hospitals affects payments under the PFS and the OPPS, as well as beneficiary cost-sharing obligations. We noted that MedPAC continued to question the appropriateness of increased Medicare payment and beneficiary cost-sharing when physicians’ offices become hospital outpatient departments and that MedPAC recommended that Medicare pay selected hospital outpatient

CMS has CMS proposed to add additional clinical families of services to the excepted (grandfathered) HOPDs that were in place before November 2, 2015 and continue to get paid at the higher OPPS rate for certain services. However, CMS ultimately chose to not do so in this final rule:

In response to public comments, we did not finalize our proposal to limit the expansion of excepted services at excepted off-campus PBDs. (Page 661.)

Further Background on the HOPD/ASC Rule for CY 2019.

Stay tuned for AAOS’s upcoming summary. In addition, TOA’s coding course on Friday, February 1, 2019 in Houston will cover many of the changes – click here for details.