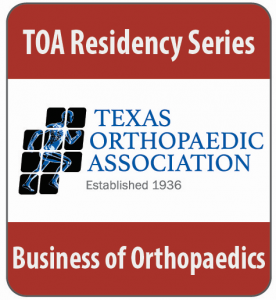 Throughout the year, TOA’s leadership educates orthopaedic residency programs around Texas about the public policy and business issues that will affect their practices once they complete their residency. Health care is one of the most regulated industries in the nation, and public policy actions play an integral role in determining how orthopaedic care is delivered to patients in Texas. The program will educate residents on how public policy affects patient care. In addition, the program will examine the business of orthopaedics and educate residents about the business side of medicine when they conclude their residency and go into practice.

Some of TOA’s past events include:

The program met several ACGME core competencies, including Professionalism, Systems-based Practice, and Practice-based Learning and Improvement. A special thank you goes out to our speakers:

“Make Your First Employment Contract Your Last.” David Teuscher, MD provided an overview of what a resident should consider when creating a practice.

“I Created a Solo Practice.” Adam Bruggeman, MD recently created a solo spine practice in San Antonio and provided an overview of what factors he had to consider when creating a practice.

“The Future of Orthopaedic Payment Models.” Louis Stryker, MD, who is a public policy fellow with the American Association of Hip and Knee Surgeons, provided an overview of new payment models that are being considered by commercial and government payers. He analyzed new quality measures that are being considered by new types of health plans, including accountable care organizations, bundled payments, and gain-sharing models.

“Collecting Outcomes.” Marc DeHart, MD provided an overview of patient-reported outcome registries and their impact on the future of orthopaedics. Several of the residents followed up with Dr. DeHart on his presentation to learn more.