TOA’s highlights of the CY 2018 proposed rule, which was released in the summer of 2017, can be found below this summary.  Many of the summer proposals will be accepted for 2018.

There were some changes in the final rule that are important to note:

TKA, THA, and PHA in ASCs?
CMS asked stakeholders to provide comments on the concept of Medicare paying for TKA, THA, and PHA in ASCs.  To review, a service must first be removed from the Medicare inpatient only list.  CMS must then add it to the list of ASC-payable services. CMS typically removes a service from the inpatient only list and then adds it to the ASC-payable service list a year or so later. (It is possible for CMS to do both in the same year.)

Recovery Auditors and TKA
RACs are prohibited from conducting site-of-service reviews on total knee replacement procedures for two years.  The following commentary can be found on page 674: 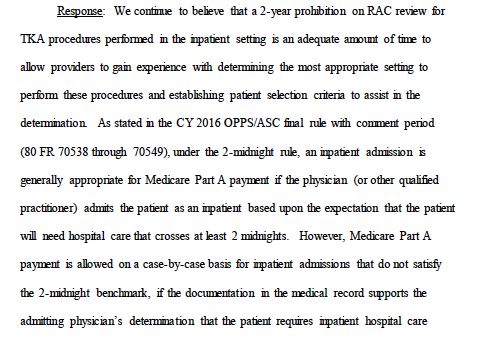 Additional Orthopaedic Services in the ASC?
AAOS asked CMS to consider adding additional orthopaedic services to the ASC-payable list for Medicare. However, CMS did not accept these suggestions:

Payment Changes for CR X-rays
TOA has been asking its members for comments regarding the scheduled cuts to computed radiography (CR). However, most of the responses from TOA members have indicated that they have switched to DR, which are not subject to cuts.

The 2018 OPPS/ASC rule includes a new modifier that will be reported on claims to identify the HCPCS codes that describe X-rays taken using CR technology in hospitals. The CR cuts will be reduced by 7 percent in 2018 through 2022.  Beginning in 2023, the cuts will be 10 percent.

Medicare Site-of-Service Price Transparency
The 21st Century Cures Act, enacted on December 13, 2016, included a provision that requires CMS to create a searchable website in 2018 that provides pricing transparency to consumers regarding services that can be offered in both ASCs and hospitals.

CMS asked for comments on the future of ASC payments over the summer in the 2018 proposed rule.  This will be a long-term discussion.

The current ASC payment system was implemented in 2008 and major revisions have not been made since that time.  Average ASC payment rates have declined relative to OPPS payment rates over the past 10 years, from 65 percent of average OPPS rates in CY 2008 to 56 percent (as proposed) of average OPPS rates in CY 2018.  However, in the absence of ASC-specific cost data, it is difficult, if not impossible, to determine whether ASC facility payment rates are in line with ASC facility resources costs and the impact on beneficiary access to care.

Stay tuned for an extensive analysis of ASC payments and policy in the near future.

Appropriate Use Criteria for Imaging
Extensive commentary regarding AUC for imaging will be available when the CY 2018 final payment rule for the Medicare Physician Fee Schedule is released.

The Summer Proposed Rule for CY 2018 Medicare Payment Policy
TOA’s analysis of the initial proposed rule can be found below.

The Centers for Medicare and Medicaid Services (CMS) placed a strong emphasis on ASCs when it released the CY 2018 HOPD/ASC proposed payment rule on Thursday.

CMS discussed the concept of paying for both TKA and THA in the ASC setting. The proposal also asked for comments on physician-owned hospitals.  CMS asked for similar comments when it released its FY 2018 proposed payment policy for inpatient hospitals during the spring.

The following is TOA’s overview of some of the issues that affect orthopaedics in the rule.  You are also encouraged to review TOA’s analysis of the CY 2018 Medicare Physician Fee Schedule proposed rule because some of the issues compliment each other.

The following is TOA’s summary of the orthopaedic-related issues.  Click here to view CMS’s fact sheet.

TKA in ASCs?
CMS asked for comments on the potential removal of TKA from Medicare’s inpatient-only list in last summer’s CY 2017 HOPD/ASC proposal. CMS ultimately did not act on this proposal in the final rule released last fall.  The concept did receive opposition from some of the large orthopaedic societies.

In this proposal, CMS is proposing to remove TKA from the inpatient-only list for CY 2018.  Traditionally, a service that is removed from Medicare’s inpatient-only list is not immediately eligible to be reimbursed in the ASC setting.  That process typically takes several years.  However, CMS indicated in this proposal that it may make TKA eligible for ASC payments in 2018. (Page 40.)

An extensive discussion regarding CMS’s reasoning begins on page 344.

PHA and THA in ASCs, too?
CMS goes one step further and indicates that it will also ask for comments regarding whether partial and total hip arthroscopy should be removed from the inpatient-only list and added to the ASC Covered Surgical Procedures List for 2018.

An extensive discussion of this issue begins on page 349.

Physician-owned Hospitals (POHs)
CMS asked the public to offer comments on POHs when it released the FY 2018 hospital inpatient payment proposal in April 2017.  TOA and other organizations asked surgeons to provide comments.

It is unclear what CMS will do as a result of the comments.  We may witness some activity related to POHs when CMS releases its final rule for the FY 2018 hospital inpatient payment policy later this summer.

Once again, CMS asked for comments on POHs in this HOPD/ASC payment proposal:

Future ASC Payment Updates and Cost Data
CMS has proposed to update the ASC payment system by 1.9 percent in CY 2018 for ASCs that meet the quality reporting requirements under the ASCQR Program.

CMS did ask for comments on payment reform for ASCs, including the collection of cost data that could be used to create a new rate update system for ASCs.  The ASC industry did oppose mandatory cost reporting for ASCs under the Affordable Care Act’s original proposal.  (The cost reporting mandate was later dropped.)

Beginning on page 43, CMS provides their interest in reforming the payment methodology for ASCs.  ASCs did not witness this much attention in past rules. 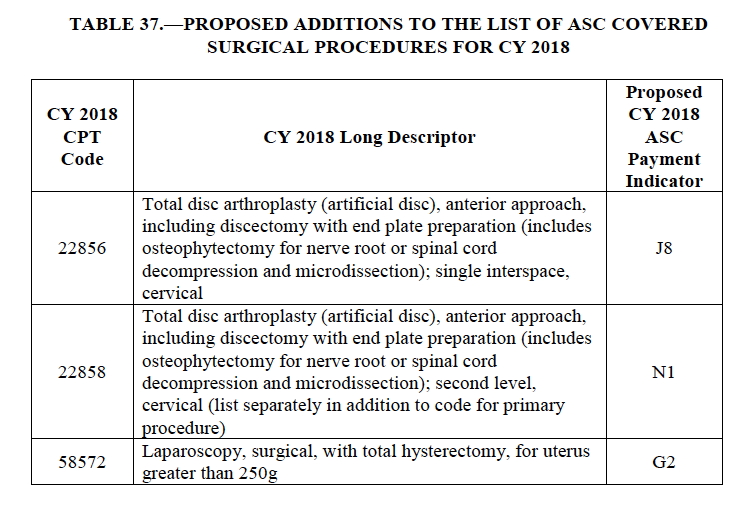 On a side note, CMS is asking for feedback on a new ASC quality measure that will measure how many people have an adverse health reaction following an ASC procedure.  CMS will work with Yale New Haven Health Services Corp.  Feedback is due on August 7.

Physician Employment
TOA has talked extensively about Medicare’s changing policy regarding physician employment over the past few years.  We won’t go into great detail in this summary.

Turn to TOA’s analysis of the CY 2018 Medicare Physician Fee Schedule for details regarding CMS’s proposal to pay 25 percent of the hospital rate to off-campus provider-based departments (PBDs) that were not mid-build when the budget bill was signed into law on November 2, 2015.  (They are currently paid half of hospital rates.)

CMS provides commentary regarding its thoughts on payments to provider-based departments (PBDs) of hospitals on page 355.  In the past, Medicare paid higher rates (HOPD) to physician services performed in PBDs as compared to the same service performed in a private practice physician’s office (Medicare Physician Fee Schedule).  The PBDs are often “employed physicians.”  Congress made major changes to this policy when then-President Obama signed a budget bill on November 2, 2015.  New payment policies went into effect on January 1, 2017.

One major question that CMS is exploring is whether to allow “employed physician practices” to offer new services that they did not offer prior to November 2, 2015 and be paid the higher HOPD rate for the new services.  CMS is collecting data on the concept of service line expansion.

HOPD vs. ASC Price Transparency in Early 2018
Last year’s 21st Century Cures Act included a provision that requires CMS to provide price transparency related to estimated payment amounts for services in HOPDs and ASCs.  The idea is to demonstrate that ASCs may have a lower cost.  CMS indicated that the website should be available in early 2018.

Supervision of Hospital Outpatient Therapeutic Services
CMS made the following comment on page 38:

In the CY 2009 and CY 2010 OPPS/ASC proposed rule and final rule with comment period, we clarified that direct supervision is required for hospital outpatient therapeutic services covered and paid by Medicare that are furnished in hospitals, CAHs, and in provider-based departments (PBDs) of hospitals, as set forth in the CY 2000 OPPS final rule with comment period. For several years, there has been a moratorium on the enforcement of the direct supervision requirement for CAHs and small rural hospitals, with the latest moratorium on enforcement expiring on December 31, 2016. In this proposed rule, we are proposing to reinstate the nonenforcement of direct supervision enforcement instruction for outpatient therapeutic services for CAHs and small rural hospitals having 100 or fewer beds for CY 2018 and CY 2019.

More commentary can be found beginning on page 369.  CMS provides the example of oncology therapy services.

Section 502(b) of Division O, Title V of the Consolidated Appropriations Act, 2016 amended section 1833(t)(16) of the Act by adding new subparagraph (F). New section 1833(t)(16)(F)(ii) of the Act provides for a phased-in reduction of payments for imaging services that are taken using computed radiography technology. That section provides that payments for such services furnished during CYs 2018 through 2022 shall be reduced by 7 percent, and if such services are furnished during CY 2023 or a subsequent year, payments for such services shall be reduced by 10 percent. We are establishing a new modifier that would be reported on claims to identify these HCPCS codes that describe X-rays taken using computed radiography technology. Specifically, this modifier, as allowed under the provisions of new section 1833(t)(16)(F)(ii) of the Act, would be reported with the applicable HCPCS code to describe imaging services that are taken using computer radiography technology/cassette-based imaging beginning January 1, 2018.

AUCs for Advanced Diagnostic Imaging
Legislation passed by Congress in 2014 created appropriate use criteria (AUC) for advanced imaging services.  This was in response to a coalition of radiologists, pathologists, physical therapists, and some other groups that were trying to eliminate the in-office ancillary exemption for Stark.

CMS’s proposal would push the requirement back to January 1, 2019, and it would be an “educational and operations testing year.”

Click here to view a summary of how the AUCs will work and how CMS will identify outliers.

CMS quoted the Medicare Payment Advisory Commission (MedPAC): “The high profitability of one-day stays under the inpatient prospective payment system (IPPS) and the generally lower payment rates for similar care under the outpatient prospective payment system (OPPS) have heightened concern about the appropriateness of inpatient one-day stays” (Medicare and the Health are Delivery System Report to Congress, June 2015).